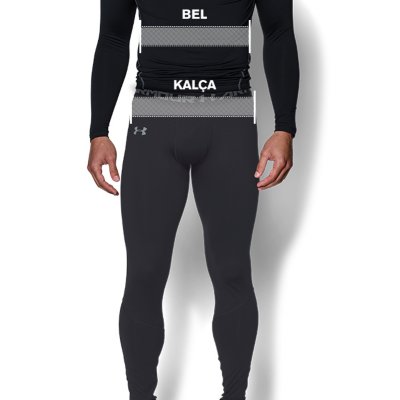 These tights fit extremely well, and I haven't had the problems that others have mentioned. They've kept their shape, the stitching hasn't started coming undone (had this with other UA tights), and no issues with transparency - it does seem to be a slightly heavier fabric than the other tights. Also, the pockets are larger than previous tights, but I haven't had any problem with items falling out. The overlapped opening on the pockets makes it much easier to access items while running and in general. Great design. PLEASE more colors! Maybe in a green?

Nice, with one flaw

These shorts are very comfortable and look quite nice. They have a liner in the front that enables the wearer to don them alone and without underwear. That is quite nice; however, there is one aspect about them that I do not like. I noticed that the material itself is thin enough that the label in the back of the shorts can be seen through it. If it were just the label that could be seen, there would be no issue at all, because I would simply remove it and leave it at that. The problem is that, in certain positions and situations, my skin can also be seen through the material. I have been around several people through the years who have worn such items and unknowingly exposed their intergluteal cleft (AKA: butt crack) to those who were behind them. If this item were less expensive and did not include a liner, I would consider keeping them and simply wear a pair of thin black underwear beneath them. But, due to the cost and the fact that I would essentially be wearing two (2) pair of underwear beneath them if I did so, I am planning to return them. It's really a shame, because I was really looking forward to wearing, using, and enjoying these shorts.

Best running short for the heat.

I absolutely love these shorts. They are perfect for running in the muggy Florida heat. The pocket is perfect for an energy gel and my iPhone 6s. Waiting for the price to go down to get another pair. I am a 31-32 waist 5-11 180lbs I am happy with the large.

I've really enjoyed running in these shorts over the last six months. There is little to know chaffing, especially on the inner thigh. The leg bands stay in place and the back pockets are perfect for holding a cell phone without a case and a few snacks for longer runs. They wick away sweat very well. My only complaint about the shorts is the UA Run tag in the back that is stitched onto the fabric. It's location rubs and rubs and rubs on my lower back, leaving a brush burn-type mark along the waist line. Other than that, it's a great item, especially for longer runs. 9/10 would recommend, 10/10 if the tag was moved/removed.

Fantastic running shorts! I will be purchasing more.

I ran a marathon this weekend wearing these and they exceeded my expectations! All future running races will be done in these. They felt amazing on and were truly a perfect fit! It had exactly what I thought it would have as far as the interlining of the tight. Very similar to a bathing suit jammer or speedo, which is why I purchased them. I like them as well as my triathlon shorts. I had no chaffing at all after 26.2 miles. I applied the normal protection. I always do in the areas that are pron to chaffing for me and this product was 100% successful! I hit my personal marathon record wearing these.

not what I expected

The pants were smaller than expected but had a smooth and compressed fit. The phone pockets will except an iPhone 7 but won't stay closed enough for the phone not to slip out. With my sweat and the local humidity these pockets are useless for phones because they are not water resistant. I sent them back. [This review was collected as part of a promotion.]

I really like these half tights. They're a little bit thicker than the older coolswitch tights were, which is good because they aren't as revealing. However, the new material chafes a little bit. The fit is pretty good, and the legs don't ride up significantly. [This review was collected as part of a promotion.]

These tights are not that bad, however, I will probably not buy another pair. These do not have any built in underwear and you must use a jock or some other form of "support" for the boys. Much easier to wear running shorts with the built in "wear". [This review was collected as part of a promotion.]

These "half tight" running shorts are fantastic. They are the best short length running tights that I have used yet! I use them exclusively now to run in the hot Florida heat. Great material and fit. They are compressing but not stifling. The two mesh pockets along the back/side are great for holding my ipod on one side and keys on the other while I run. I wear these shorts on their own when I run and they keep things modest enough. The only reason that I gave these shorts 4 stars instead of 5 is because they do not have a built in brief, as the product description says. In fact, that was the reason that I chose to buy these running shorts over the other options by UnderArmour and other brands. The shorts have a liner in the front, akin to what swimming jammers have. However, this liner does not provide any additional support to the shorts, and as a result things still stick to the side of one's inner thigh from time to time during a sweaty run. These would be the perfect running short if they did in fact contain a supportive liner or pouch. I'm hoping that UnderArmour stays true to their product description with the next edition of these shorts! All in all, fantastic running short, worth every dollar!